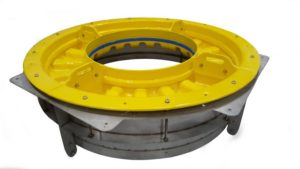 the global advanced materials group, has produced and delivered 8 General Transition Piece Sealing Systems to National Grid UK, and has received an expression of interest for a further 60 over the next 6 years.

This light weight, removable composite General Transition Piece (GTP) is used for sealing around pipelines where they pass through concrete walls, such as inspection pits, across a multitude of utilities including gas, water and oil and gas. This allows for time and cost-effective inspection and repair at pipe transitions.

This first commercial order has seen production and delivery of 8 GTP units for transitions across two National Grid Gas sites on the UK gas transmission network. Paul Ogden, a Senior Civil Engineer with National Grid says, “During the next 6 years, up to 60 of these units are likely to be installed in the National Transmission System and will significantly improve safety as well as creating savings of up to £5 million in the next five to ten years, with further savings beyond that.”

Using the current cast concrete method proves costly as seals degrade over time, allowing ground-water and fine material to flow through the transition, potentially causing damage to the pipe and its coating. Inspection and replacement is also time and labour intensive with added safety measures caused through increased use of heavy machinery on-site.

Haydale’s GTP light weight system has been jointly developed with National Grid via their innovation initiative. The GTP provides effective sealing around the pipe for up to 50 years, and allows pipe transitions to be inspected by a two-man crew, without the need for excavation, demolition, or lifting equipment.

The system was given an ‘Award of Merit’ at National Grid’s 2016 Chairman’s Award, held in New York, USA.

Keith Broadbent, Managing Director Composites at Haydale, commented: “The removable composite GTP system is a huge step forward in safety and efficiency, solving a major problem faced by utility providers. Haydale is pleased to have found a solution and is working alongside National Grid to see the first fully installed and in use in the UK. With such a novel, advantageous innovation, it is not surprising to see our GTP system move from research and development to commercialisation so quickly. We look forward to working with more utilities companies, globally.”